Invinity is creating Australia’s first dispatchable solar power plant with an 8 MWh Vanadium Flow Battery (VFB), coupled with a 6MWp solar array. Find out more in the case study below.

Yadlamalka, South Australia will play host to one of the world’s largest solar-powered vanadium flow batteries (VFB) as part of an innovative $20m AUD project which will see an 8 MWh Invinity VFB combined with 6 MWp of solar panels to unlock low-cost, low-emission energy for the Australian Grid, producing approximately 10 GWh of dispatchable solar power each year.

Located in rural South Australia, the project nestles near the Flinders Ranges, in the Australian Outback.

Australia’s rapid uptake of renewable energy in recent years has driven the need for investment in flexible energy storage technologies to manage the variable output from those generation sources. The Yadlamalka Energy project provides a glimpse into the future of electricity grids in Australia and around the world. It has been supported by ARENA, the Australian Renewable Energy Agency, with a significant grant of $5.7m AUD.

Wholesale energy pricing in South Australia, like other markets which have a high penetration of renewables, has a distinctive shape characterised by low (even negative) energy prices in the middle of the day, with two distinct price spikes occurring around sunrise and sunset. 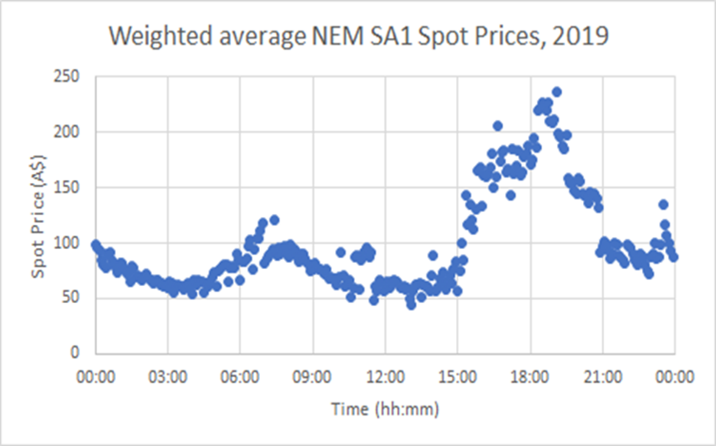 This characteristic shape is caused by large amounts of low-cost solar power coming online during daylight hours creating oversupply in the market. When the sun goes down, this low-cost capacity drops off rapidly, leading to undersupply whilst conventional generation ramps up to fill the shortfall. Due to its distinctive shape, this market behaviour is often referred to as the solar ‘duck’ curve.

The solar duck curve raises an important point for Solar developers and project owners and is a key motivation for the Yadlamalka Energy Project. Solar-only projects can only output during daylight hours and are therefore exposed to risk from lower prices as their revenues are cannibalised by other solar-only projects in the area exporting power at the same time.

Flow batteries provide the answer to overcoming this risk for developers and asset owners. By storing energy when market prices are low during the day, and discharging into the evening and morning peaks, asset owners can maximise their returns and derisk revenues relative to solar-only projects.

As flow batteries do not suffer from degradation like lithium-ion technology, they can be used constantly throughout the day, charging and discharging for a range of services. The Yadlamalka Energy project will utilise the flow battery to perform 3 different revenue-producing services.

These multiple cycles can be ‘stacked’ together throughout the day to provide maximum flexibility and maximum return for the project owners. The flow battery operating philosophy is demonstrated below.

This operating strategy maximises throughput on the flow battery, which is charging and discharging almost constantly over any given 24 hours. Returns are generated from 3 distinct applications:

Solar shifting – storing excess solar generation during the daytime when prevailing market prices are low and discharging into the evening price peak.

Explore our other deployments

If you’re a utility, developer, EPC, or financier please contact our commercial team to discuss the details of your project. We work with you to develop a robust business case and financial model.